White-beaked dolphin are sturdy, robust-bodied dolphins that can reach 3.1 metres in length and weigh up to 350 kg when fully grown. The dark grey dorsal fin is tall and falcate (curved) and the beak is short and often entirely white. Colouration is a mix of dark grey back, tail and pectoral fins, with greyish-white flashes along the flanks and a pale grey patch behind the dorsal fin. The tail stock is quite thick. Unlike other dolphin and whales (eg Bottlenose) - photo identification from boats has proved to date to be a poor method of individual identification in this species*. This has in part been due to the infrequency of notching in the posterior edge of their dorsal fins and the amount of spray that these dolphin generate. There are ongoing efforts to improve individual identification using dorsal fin analysis but the results to date have not been publsihed.

White-beaked dolphins are fast, powerful swimmers that are attracted to boats in order to bow ride; this involves swimming in the pressure wave in front of a boat, which reduces energy expenditure and is also probably a fun activity. They are quite acrobatic and frequently ‘porpoise’ (jump clear of the water) when travelling at speed. These dolphins are usually seen in small groups of three to 30 animals but occasionally form larger groups of several hundred individuals.

White-beaked dolphins have a varied diet of fish, ranging from small schooling fish such as sandeels and herring to larger bottom-dwelling fish including cod, whiting and haddock. They are also known to eat molluscs, squid, octopus and some crustaceans. These dolphins will work together when feeding using whistles, tail slaps and leaps to coordinate their hunt, and they may also associate with feeding minke whales.

One of the major threats to white-beaked dolphins is incidental capture and drowning in gillnet, driftnet and trawl nets. Rising sea temperatures caused by climate change may affect the future distribution of white-beaked dolphins in our waters because theUKshores represent the southern limit of their distribution. In addition to these threats, like other cetacean species, the white-beaked dolphin is affected by marine pollution, habitat degradation and disturbance caused by boating activities. The effect of an accumulation of organochlorines (pesticides) in cetaceans’ bodies is not yet understood. White-beaked dolphins are protected underUKand EU law, principally under Schedule 5 of the Wildlife and Countryside Act 1981 & by the 1992 EU Habitats and Species Directive. 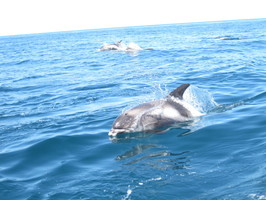 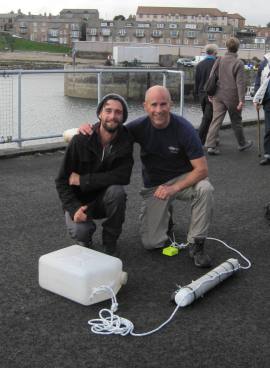 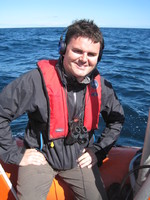 Simon Laing from Newcastle School of Marine Science working with us using hydrophone.

National Trust team on board 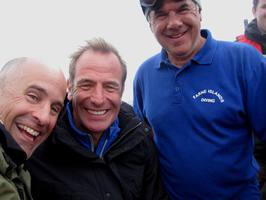 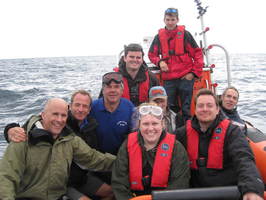 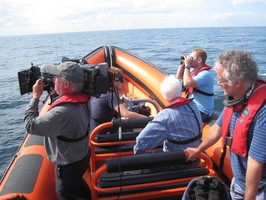 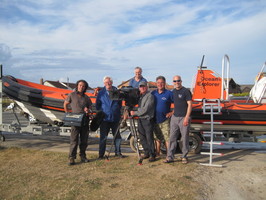